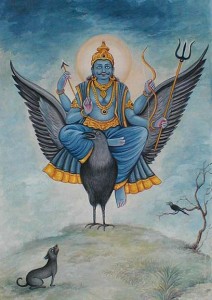 This post is about a very interesting talk that was given by Joshua Klein on Crows and their intelligence, on the TEDtalks website.  It has particularly fascinating information for Astrologers, as the crow has a symbolic association with the planet Saturn, and this video unintentionally demonstrates that affinity very well.

The nine planets in Jyotish are said to produce all the many things in the world and in nature by mixing and blending their influences.  Each planet is a “karaka”, or producer, of a particular concrete thing in someone’s life. For example, Saturn “produces” one’s servants.  So in ancient times, if a King wanted to know how his servants would be, and whether they would work honestly and dilligently, or whether they would be dishonest and lazy, the skilled astrologer would look to the condition of the planet Saturn.  The astrologer would look at other things too, but the producer of that correlating archetype in the physical world is very important.  For learning about the King’s soldiers or ministers, we would look to Mars and Venus, respectively.  There are many other factors the astrologer would look at, but this is perhaps the most important.  Another way to say it is that one has to look at the planetary archetype that matches the physical entity in one’s life and “as above, so below”.  So if there is a difficult Saturn “above” in the heavens at this king’s birth, then there will be difficult servants “below” in this person’s experience of an earthly incarnation. This is a foundational concept in the occult sciences in both the east and western cultures.  It can be a hard thing to comprehend, so if it is difficult to grasp, just imagine it for now.

If you study astrology, then you probably know that crows relate to the planet Saturn and should watch the video first and observe the similarities yourself.  If not, then you can read this list of congruencies and hopefully begin to appreciate this connection.

I will list some of the archetypal synchronizations I noticed below:

Overall I think this video is fascinating even without respect to Jyotish, but for those with interest in astrology and mythological symbolism, you can see there is much to be appreciated between the Crow and the planet Saturn.  And by appreciating the symbolic value of our environment and the life around us, we can feel more like we are a part of something greater than our little self.  In this way, mythological symbolism can have therapeutic properties for our minds.

If you notice any other interesting astrological correlations between the behavior of crows and the symbolism of the planet Saturn, please share below in the comments section. 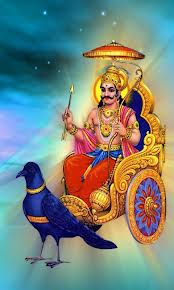 Photos: Mythological image of the graha Saturn, said to ride upon a crow or vulture.

21 thoughts on “Saturn And The Crow”

This site uses Akismet to reduce spam. Learn how your comment data is processed.