Its an interesting fact that during the 30 day period in which the Sun passes through the tropical sign of Scorpio (Oct 23rd-Nov 22nd), the United States, and many other cultures celebrate five different holidays that deal with the main themes of Scorpio: death, and transformation. 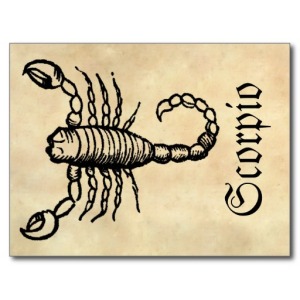 Each of these holidays is centered around a major theme of the sign of Scorpio, and it really seems appropriate.  Why?  Because of all the different times of the year, this is the time when the Sun is passing through the sign of the scorpion. This 30 day period only occurs once a year, each year, like clockwork. As said above, Scorpio is the sign of death and transformation, so there is no better month out of the year to assign holidays that honor and direct the public’s attention to the dead.  To fully appreciate this unique synchronicity, it is important to understand what the 8th sign of Scorpio deals with:

Scorpio has to do with the transformation of the soul, it is the part of the chart that deals with our longevity, vitality, and ability to fight for survival.  It can represent actual battles as well as the spiritual, inner battles that we all fight between our higher and lower natures.  It is the time of year right after Libra, when everything seemed peaceful and balanced, and the leaves were turning beautiful colors.  Now in Scorpio it is getting colder and darker each day more quickly than before, and the leaves are all gone or rapidly falling. Everything is turning brown, beginning to hibernate, or dying.  The theme is either turning within to transform and survive through winter, or die.  Scorpio is the stage that has to do with the lack of nourishment in life, and the symbolic scorpion is meant to turn its energy, or “water” within to derive nourishment, hence it is a Brahmin sign (oriented towards enlightenment) and can set the stage for great spiritual development.  This depends, however, on the nature of the planetary karmas that are involved.  Difficult Scorpio related karmas show that one is not going to be able to find inner nourishment easily, and will likely turn to unhealthy ways of filling that void.  This can lead to vices of all kinds. Here we see the origins of the negative associations of the sign coming in: Sex, abusive tendencies, addictions, breaking the law, drama, wild breaks and changes, and battles of all kinds.

If you are new to astrology, don’t expect to understand this most mysterious sign at first glance, it takes time and contemplation.  For now just consider that the Sun (The soul of all) passing through the sign of death, the departed, and the transformations related to that, would naturally suggest that this is the best month of the year to honor the dead.

Halloween/Samhain –  This was originally a Gaelic festival that marked the end of the harvest season and the beginning of winter, or the darker half of the Solar year.  It is widely believed to go back to Pagan times before the Christian era.  This was the time when the veils between the spiritual and material worlds were thought to be thinnest, and the fairies and spirits were able to most freely intermingle with the Earth realm at this time.  Offerings would be left out for these spirits to honor them, as well as to ensure some degree of safety through the coming winter.  According to some scholars, it was only after the Church condemned this whole festival that the fairies and spirits began to slowly take on a more sinister or wicked aspect.  Now the “offerings” have been boiled down to kids in scary costumes asking for candy… If we choose to see it in its original context, however, it correlates to Vedic Astrology, as Scorpio is one of the three water signs (the brahmin signs). These signs are the most naturally oriented towards spirituality, and are the most psychically sensitive, with Scorpio being the one that is always considered most vulnerable to negative energies, or other worldly factors such as spirits, etc.  {Note: To explain why this is would require a post in itself, but feel free to leave a comment if that is desired.}

All Saints’ Day – This is the day after Halloween, on November 1st.  It is set aside to commemorate all the Saints known or unknown in the world.  It is also refered to as All Hallows’ Day, or Hallowmas by Shakespeare.  It is believed by many that this holiday was instituted to have a sort of Christian counter-holiday to the Pagan Samhain festivals at this time, and this is logical.  Again we can easily see the connection to Scorpio, as Scorpio is a Brahmin Sign.  Brahmins are the priests or saints of the ancient Indian caste system.  This relates to the spiritual battles touched upon earlier.  A Saint is really just someone who has won the spiritual battle that we all must fight eventually, between our higher and lower nature.  In some respects, All Saints’ Day could be seen as a holiday that is honoring all the victorious Scorpios of the past, known or unknown.

All Souls’ Day/Day of the Dead – This is the day after All Saints’ Day, and is a day of prayer for the dead and especially one’s relatives.  This is like All Saints’ Day, but more universal in that it is about honoring all Souls everywhere.  Still a very similar Scorpio theme of death, and prayer, but with an added attention to family.  The family connection makes sense as Mars produces our Siblings and Mother which is the majority of the family.  Another interesting fact is that the 3 day period of October 31st- November 2nd is also a time in Mexico when a similar holiday is celebrated, The Day of the Dead.

Veterans Day– This is an official United States holiday on November 11th that honors people who have served in the US armed forces.  Mars is the Lord of scorpio, and is the planet of war, and soldiers, and battles, as mentioned previously.  Of course fallen heroes will naturally relate to the negative sign of Mars, and again we see a holiday that correlates as the Sun passes through Scorpio.  Here we see a similar theme except that we are honoring those who have fought actual physical battles for the noble cause of defending their nation and freedom.

Remembrance Day– This is held on the same day as Veterans Day, November 11th, but is more international as it is observed by all Commonwealth of Nations states and it honors all those members of the armed forces who have died in the line of duty.  There is a slight difference in that sense, as Veteran’s Day does not distinguish between honoring those who have served and those who have died.  Still we see the same themes repeating that should be familiar by now.

Isnt it interesting that these five Holidays which focus on death and transformation happen to each fall in the one sign that is most appropriate?  One naturally wonders if it is all just coincidental, because if astrological thought is correct then we should naturally feel these ways at these times… Or if it was intentionally arranged by Astrologers of Royal Families?  Without evidence it would be hard to say.  There is, however, no disputing the connection of these five holidays to the Tropical sign of Scorpio.

2 thoughts on “Why So Many Holidays in November For The Dead?”

This site uses Akismet to reduce spam. Learn how your comment data is processed.