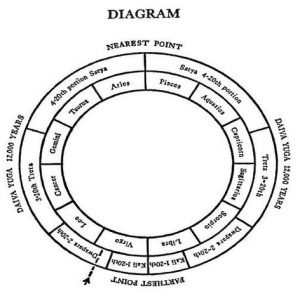 A diagram of the Yugas as outlined in the introduction of Yukteswar’s book, The Holy Science. They are the same as the Greek ages of Iron, Bronze, Silver, and Gold, and proceed in an ascending and descending pattern, so that both Kali Yugas are consecutive, and both Satya Yugas are as well.

“Astrology is too vast both mathematically and philosophically, to be rightly grasped except by men of profound understanding.  If ignoramuses misread the heavens, and see there a scrawl instead of a script, that is to be expected in this imperfect world.  One should not dismiss the wisdom with the ‘wise’. ” – Sri Yukteswar

Astrology is one of the oldest sciences known to man.  When we look at the ancient cultures all over the globe, we see that Astronomy and Astrology had a prominent role to play in regulating society and daily life.  And the more we learn about some of these ancient cultures, the more we realize how refined and scientifically developed many of them were.

The Rishis, or Seers, of ancient India described a grand cosmic cycle (24,000 years approx.) with 4 eons called “yugas”.  This is the same as the Greek concept of the Iron, Bronze, Silver, and Gold Ages.  The Iron, Bronze, Silver, and Gold Ages correspond to the Kali, Dwapara, Treta, and Satya Yugas.  The same situation is described in both Greek and Indian traditions, with humanity being very enlightened and happy in the Golden Age, and then slowly falling from that peak down to the materialism and ignorance of the Iron Age.  The cycle then goes back in an ascending order to the Bronze Age, then to the Silver Age, and finally another Golden Age occurs.  The Vedic Seers describe the Kali yuga as the darkest age when ignorance and suffering are in full swing.  During this approximately 1,200 year period the Earth is furthest from the galactic center and so the average human consciousness is somewhat dimmed.  This occurred around 500 AD and continued into 1700 AD, when the Dwapara yuga began to ascend for 2,400 years, bringing in more intellectual capabilities for mankind and technological developments to improve the quality of life on earth.  The closer we get to the center of the galaxy, the more intelligent the average human becomes, and therefore society advances as a whole. In the  Treta yuga, or the Silver Age, humanity is said to be advanced, civilized and life is more enjoyable.  It will start in 4100 AD and run for 3,600 years.  Then comes the Satya yuga, or the Golden Age, which will go for 4,800 years, and humanity will be at its peak of civilization.  Astrology itself is really more of a Treta and Satya yuga science.

By researching into the Iron Age we can see that things were pretty bad during medieval times, with the average person living only to their 30s and the massive losses caused by the plagues.  That was Kali yuga.  This is now Dwapara yuga, the electrical age, and life is getting better.  We are learning to use electricity and make our lives easier as a result.  Still not ideal though, and so Astrology is in the same state.  It is not until the higher ages of Silver and Gold, Treta and Satya Yugas, that Astrology is fully appreciated and understood by the entire population.  We can see evidence of this when we research cultures such as Egypt, that experienced what seemed to be a “Golden Age”, and we find astrological markers and symbolism throughout the period.

This is why it is an exciting time, because as our society is advancing, more people will begin to be open to Astrology and other ancient arts, and with more research and practice by these same people, Astrology itself will begin to flower back into the vast art and science that it truly is.  With the rise of computers it has become far easier for calculations to be made, making astrological calculations more open to the publics participation.  This has been an immense help that the Dwapara Yuga has brought about.

Because much of the methodical and scientific side of Astrology has been lost during the dark age of Kali Yuga, much of the astrology we are familiar with is diluted and not very accurate.  In some cases, the scriptures are unclear, or perhaps mistranslated, and many Astrologers have not bothered to verify the authenticity of techniques they use.  To blindly use techniques without verifying their accuracy is no different from going to a church and blindly believing what a preacher may tell you without thinking for yourself about the matter.  Its surprising to think astrologers have been that way, but these are the residues of the darkness of Kali Yuga.

As time goes on and we advance more into the Bronze Age of Dwapara Yuga, the whole planet will become gradually more intelligent and all the arts and sciences will grow, with Astrology being no exception.  Astrologers will not only use intuition, but will have a logical and methodical approach that can be replicated over and over, which is the way Astrology was meant to be practiced.  This logical framework will also improve our intuition, because it will give a solid and accurate foundation for our subconscious mind to work with and make the intuitive side of the mind more reliable.

As we progress more and more as a civilization, the world will become more globalized and unified; and the lost knowledge of ancient cultures will be pieced back together like a jigsaw puzzle.  Already the greatest sign of an ascending Bronze Age and a more unified world culture is the birth of the internet and other electronic devices.  It allows people of all walks of life to share knowledge and relate in ways that just would not have seemed possible a century ago.

That is what makes me so excited to be studying and practicing Astrology, to be typing away on this site, and to be sharing this wonderful thing that the world is rediscovering.