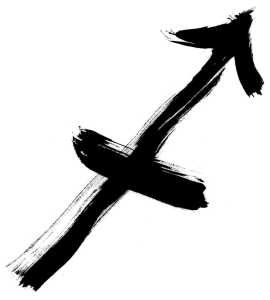 The symbol of Sagittarius is an arrow, and it is the sign of an Archer shooting towards a distant target, thus symbolizing our goals and long term purpose.

Now that Saturn has completed most of his course through the tropical rasi of Sagittarius, I felt it would be appropriate to go back and relfect on the statements I made one year hence about this placement. Read the Part 1 of this article to get caught up on what I was saying and predicting for this transit in July of 2016.

My main point was that with Sagittarius actually being the a major sign of accidents when cruel planets are in it, we need to watch out for this transit of Saturn through it.  Sagittarius is the sign of our ideals, goals, our culture, philosophy, and how we aim for our goals. It is an archer aiming at a target, afterall. But not all goals and aims that man has had have been healthy or good for the world. When this rasi is afflicted in a birthchart, and no other gentle planets help it, the person can have very unrealistic goals and very unhealthy or unwise ways of approaching them.  It is only when Sagittarius rasi is strong and well manifested that one can naturally set healthy and ideal goals and actually go about achieving them relatively easily.  Now we can see why Jaimini would warn us about Sagittarius rasi, saying “while proceeding, a fall from a height”.  The ninth sign has to do with how we proceed down the path of our life as it unfolds, hence it rule the philosophy we approach life with, as one example of this.

I know that this may seem very unusual and most Astrology teachings do not share this idea about Sagittarius. It is normally a sign that is associated more with jovial, lucky, positive things. But test it out for yourself if you do not believe me. Saturn crossing Sagittarius has been a great example of how easily a “fall from a height” can occur when we do not have healthy and realistic ideals and approach our goals wisely.

#6: Doreen Virtue Converts To Christianity, Sparks Debate – A well known New Age teacher named Doreen Virtue who has written over 50 different new age books, made oracle cards, angel cards, tarot cards, etc. She is very well known, I have seen her cards before. She released a video on the day of the solar eclipse (No doubt that this influence was important here too, not just Saturn) publicly denouncing fortune telling and card reading and all of the sort. Read the above article for more information, but many people are lifelong followers of her, and feel very betrayed. She is a Sagittarius/Guru type figure, as it is the sign of teachers, gurus, and guides.  This is definitely a fall from a height for many of her followers who do not share her shift in opinion, and now feel abandoned, being told even to burn some of the books that she herself wrote.

#7: Bill Cosby’s fall from a height – read the timeline that clearly shows how it was not until just one or two months of Saturn’s ingress into Sagittarius (September of 2014) that the avalanche of accusations against Bill Cosby resurfaced (Nov 2014) after years of silence. Bill Cosby is an Aries rising, ruled by Mars, and it is worth mentioning that the only enemy of Mars is the planet of the Media, and comedians (Mercury). Note how the article speaks of the “joke heard round the world”, and how it was a comedian that in many ways is responsible for bringing it all back to light. Further note that his lawyer has stated that he is legally blind now and “living in his own perpetual hell”.  According to an old book in India about Karma and diseases that result from karma, the disease of blindness can be caused by having looked at other peoples wives too much in past lives.  In Many ways Cosby fits this Sagittarius situation well as it is also a sign of the parents, as the parents are major guides in our life and this is the sign of guides.  As a role model for America, it seems Saturn could no longer allow for him to hold that position anymore and brought about this fall.

#8 More lawsuits and accusations against a guru – This one is creepy and very similar to the Bikram Yoga lawsuit that was covered in part 1.  A swami has had several lawsuits filed against him for sexual misconduct. This article states that he has even been caught on video, but has been able to manage to delay the court hearings for some time.  According to this article, he even makes disciples sign non-disclosure agreements about the “tantric” practices that are done.  It seems like a pretty strong case has been made.  Very creepy.

#9 Pretty much the entire situation with the United States Election of 2016.  I mean talk about a fall from a height. I dont really need an article to share, because everyone knows about this. It started with Bernie having the primaries rigged against him and having his nomination stolen away from him. Most people couldn’t really picture him winning though, myself included.  No one actually liked Hillary Clinton at all really, but millions rallied to her just because? The whole situation was a mess, yet everyone was so confident that Hillary would win that news sites were giving Trump only 1% (remember, afflicted Sagittarius rasi can translate to over optimism, over confidence, confidence that is unfounded. This is the perfect setup for a fall).

No one expected Trump to win, and so him winning was a major fall from a height for most Americans.

What is the lesson to be learned here?  (Not a lucky time for gurus and teachers?)

Probably more than one, but my take away is to always pay attention to the Sagittarius rasi and when cruel planets afflict it, and no gentle planets support it, watch out for an accident or fall from a height. If you have these placements in your chart, be more careful about your goals and ideals and make sure you do not have unhealthy, or fanatical beliefs about a thing. We can get ourselves and others into trouble when we are too sure that we are right. Most of the time it seems fanaticism only occurs when our faith begins to flicker anyway.  If you feel you need to prove your beliefs or philosophy to someone, you still are probably not living it enough. Be realistic at least for the remaining transit. Have some detachment if you still have not met your long term goals.

May Ganesha smile upon us as we go towards the goal!