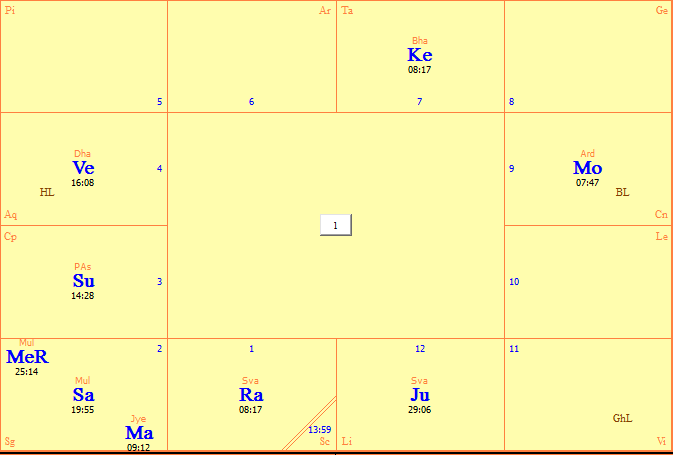 In this post we will examine how to see the possible birth of children happening in the chart of a woman, by using both the vimshottari and caranavamsa dasas together.  Everyone uses vimshottari, but it is always better to use more than one technique or timing system to see something before predicting it with confidence.  The more techniques, the better, or else, why would Vedic Astrology texts have so many different techniques?

This person had their first child around September of 1981, and the second child around February of 1987. We will start with the first child.  But before we go into the example, certain principles need to be known to fully appreciate this example:

Now let’s look at the first example. Here is the saptamsa chart of the native, and the vimshottari dasa. The first child was born during Sa/Ke dasa, which is not naturally a dasa that relates to having children, but let’s look more closely. Saturn rules Venus which sits in the 4th house, suggesting motherhood could be coming soon. Venus is also the Matrukaraka and Putrakaraka, the “Mother-producer” and “Child Producer”, respectively.

Ketu is ruled by Venus in the rasi, and so giving the results of Venus, which is to say that Ketu has the same children focused agenda as Venus. Saturn is in a sign of Jupiter, and Ketu is being rasi aspected by Jupiter, showing the connection to children (Jupiter) of both Saturn and Ketu. Jupiter is the planet of children and progeny, so here is another connection to children with Saturn and Ketu. But it gets better when we look at the Saptamsa.

Here we see that Saturn is conjunct Jupiter, the karaka of children, in the key varga of children and fertility. Further, it is in the 9th house, the key house for a woman when it comes to childbirth. Even further, Ketu, the sub period lord, is ruled by Jupiter, so acting like Jupiter. Now we see that Ketu has an especially strong agenda to also produce children, even though you wouldn’t think that because its Ketu.  Ketu is also in the 5th house, the main important house for children. Notice also how the important 7th house of the Saptamsa holds Moon and Mars, two key planets of motherhood, further confirming this woman is meant to be a mother. This Mars also rasi aspects and gives “manifesting strength” to Aries, enabling it to manifest its indications more smoothly, and its indications are to produce children as we can see. Also, it is important to remember the rule that Saturn and Jupiter conjunct often indicates children, which is working nicely here. Also, when the sub period lord is in a trine to the main period lord, then things work out more smoothly.  All of these factors may also have helped buffer the fact that Saturn was fallen here in the D7.

So now we can see how Sa/Ke period was a very important period for this Native to have a child and have the course of their life change completely as a result.  But if the course of life is going to change greatly, then we should also see this from caranavamsa dasa, as this is great for seeing big changes in our path unfold. (Cara means “change” and the Navamsa we know has a lot to do with the changes on our path, so the name itself implies this)

We can see that the native was running Cancer/Aquarius period at the time of the birth of the first child (Sept 81′). In the rasi chart, Cancer is the all important 9th house, the very important house of children for a woman. It holds its lord, the Moon, which gives it “manifesting strength”. Cancer and the Moon are also the most appropriate planets and signs for Motherhood as well. Aquarius holds Venus, which we already know has an agenda for children (PK) and is aspecting the Moon in Cancer, while the Moon aspects back to Venus in Aquarius.  This shows that the Cancer rasi and the Aquarius rasi both have a karmic connection (rasi aspect) and an agenda to yield progeny. This is further indicated by Jupiter rasi aspecting the Aquarius rasi, giving Venus strength to manifest. So both the Cancer and Aquarius rasi have an agenda for children and are being manifested to do so. Is it any wonder, then, that a child was born to her during the time that these two signs were letting their karmas play out? On top of what was playing out from Vimshottari as shown above?

The second child was born around February of 87, when Saturn/Moon period was running. The Moon sub-period running just makes sense, as we have already seen how important that 9th house moon is for making her a Mother and for childbirth.  All of those same Moon factors were being triggered again in the rasi chart and I don’t need to repeat myself here.

Looking at the saptamsa, we see that Moon in the seventh house in Aquarius again. Note that again the idea of the Mahadasha and Antardasa lords ruling each other or connecting in that type of way makes it an important time for the varga where it is occuring in. Here we see Moon in the sign of Saturn, and both of them Rasi aspecting with the aforementioned children agenda and so it is really very logical that in the Saturn/Moon period another child was born. The Moon is also in the 11th from Saturn which is a favorable Mahadasha/Antardasa house alignment and leads to more gains in the period. But this may just be canceled out by the fact that Saturn and Moon are in 6th/8th house positions which can imply disharmony and friction in the period. The period certainly had its share of challenges which is to be expected when raising one’s second child while the first is only five years old.

Looking at the caranavamsa dasa, the Cancer/Leo signs were running. Cancer was still running its karmas and so much of what was said above was still true of this time in her life. Leo was the sub-period, and Leo is the 10th house of her rasi chart. Leo also has strength to manifest as it is aspected by Jupiter, and it’s lord the Sun, both giving manifesting strength (Leo also holds the pada of the Sagittarius rasi, which is where the lagna lord sits, for those who study padas). When we look at the

When we look at the saptamsa chart, we see that Leo is the lagna, so of course Cancer/Leo period will be important for saptamsa things (progeny).  Leo again gets manifesting strength from the Sun (who is fallen though, so not much) and Jupiter (who is strong and making up for it) in this varga as well, so childbirth is further confirmed in the saptamsa again by using caranavamsa dasa.

Is it not fascinating to see how both these timing systems were able to pinpoint two very important times for children to be born, using the same techniques and principles in a repeatable fashion? This is when Astrology begins to really become scientific, if you ask me. When we can repeat techniques over and over on the same chart or others and still get good results 75% of the time, that is an amazing thing. There is more to Astrology than just science and repeating techniques of course, but this is a very important facet and one of the features that distinguish Jyotish from other occult systems. I hope this serves as a good example of that.