This quote is from a foundation text of Vedic Astrology, the Brihat Parashara Hora Shastra, on the allotment of different deities to the Grahas (The Sanskrit word for the planets).  These are not the only associations that the Grahas have to different deities, however.  It should be remembered that all the many deities of Hinduism are considered to act through the agency of the different Grahas for their purposes and responsibilities as custodians of the various forces of nature on Planet Earth.  So while this list is not meant to be the only correlation of Deities to Grahas, it is a very insightful list to consider, shedding much valuable information on the nature of the different energies of the Planets.  In this post, for brevity’s sake, we will just be focusing on Saturn’s correlation to Brahma as it is quite interesting to contemplate.

This relation of Saturn to Brahma is very confusing and hard to understand for most.  If you study Jyotish you are probably already wondering where I am going with this, but lets first make sure we understand a little about Saturn.  He is in many ways the toughest planet to understand… Saturn rules death, lack, loss, negative karma, disease, depression, sorrow, and those things we must do that we are not good at doing.  When well placed in the birth chart, He is the planet that does the hardest jobs that no one else cares to do.  He does it without concern for himself and just for the sake of others. When Saturn is weak one is not able to do the hard things they know they must do for success and therefore usually are not very successful in the world, as most successful people in the world didn’t get that way by avoiding or not wanting to roll up their sleeves and get their hands dirty.  Saturn is the one who does that. Jaimini says that if Saturn is in the 10th from the swamsha (atmakaraka in navamsa) the person will live a life of “accomplished deeds”.  Meaning this person gets things done in the world. 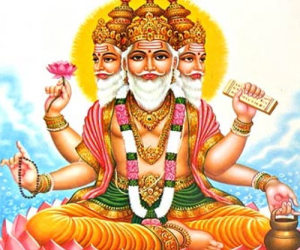 Mythological image of Brahma. Depicted with four heads, each continually reciting one of the four vedas. Even his mythological image seems much more busy at work like Saturn, when compared to Vishnu and Shiva who are both mythologically seen lounging on a coiled serpent, or sitting in blissful samadhi.

The word for the absolute God without attributes is Brahman in Hinduism.  The names of the threefold aspect of God as Creator, Preserver, and Destroyer are Brahma, Vishnu, and Shiva respectively.  This correlates to Christianity and its holy trinity of Father, Son, and Holy Ghost, actually.  Brahma is the God of creation, he creates but does not get involved with creation and does not destroy or transform it, those are Vishnu and Shiva’s roles… Everybody knows that, so what is my point?  Well Saturn is not the planet of creativity, so you would think Jupiter or Sun would be related to the creative aspect of God (Brahma).  But they arent… Why is that?

I am not asserting to know exactly why that is, but here are some interesting ideas about why that may be the case:

Brahma is the force that releases just the right finite amount of God’s infinite potential of energy to create a galaxy and cause creation to occur.  Too much or too little of God’s infinite potentiality would cause tremendous imbalances in the grand scheme of the creation… So Brahma is that force which releases just the right amount of energy, but not too much.  In this way we can see that for creation to occur most perfectly from God’s standpoint, there needs to be a Saturnian element of restraint involved for the creation to be harmonious and properly balanced…If new worlds were constantly created before the old ones got destroyed then everything would be off and their would be less purpose to creation.  In a smaller way this is why I think the yogic guidelines Patanjali gave in the Yoga Sutras called one of the Yamas “Brahmacharya”.  In plain english, this is one of the 10 do’s and dont’s of Raja/Kriya Yoga and it is normally translated as “celibacy”.  This is a bad job of translating though.  Brahma means God’s creative energy, and Charya means “going, driving”.  So it simply means “going the way that God goes”.  And God doesn’t waste It’s creative energy in frivolous sexual pursuits.  So Brahmacharya really means to use one’s creative energy wisely and like God would, so as not to waste the spiritual force generated from Yoga practice.  Its true that sexual over-indulgence is the fastest way to waste that force for most people and so this is why it has slowly come to mean that, though it really means much more.  Talking excessively, being on social media unnecessarily, and eating bad foods that take too much energy to digest are just as obvious and popular ways of wasting one’s spiritual force in this modern age as sexual indulgence is.  And in the same way but on a smaller level, when Saturn is strong in a birth chart that individual will usually be much more focused on important works and not be as easily distracted or waste its energy on over-socializing, overeating, or overstimulation in general.  And so from the perspective of God it may be more that creation is not real, it is an illusion, but it is Brahma/Saturn’s job to continue this illusion for the purpose of individuals to grow beyond whatever separates them from God and to eventually unite with God.  So in this sense creation is very much an “Accomplished Deed” and thus related to Saturn.  Also we must remember that we dont incarnate unless there is some Karmic debt (Saturn) that must be worked out.  Even having too much good karma can cause a need to reincarnate and live an awesome life, which happens often for Saints and Yogis.  Even this is still a karmic debt that must be spent before the positive and negative karmic-balancing scale can go back to zero and one can finally become liberated.  Its like a bank account balance, it has to be zero to close out (get liberated), so a positive balance must be spent in an incarnation, and a negative balance must be worked off in an incarnation.  So when we see that Creation is actually just this path we must navigate to get beyond our lack and separation, and to merge back with God, we can see how similar it is to Saturn’s astrological role.

Here is another way to see how creation is related to Saturn, and this is basically paraphrasing what Ernst Wilhelm has written in his book Graha Sutras, so all credit goes to him on this perspective:  In order to have creation, the Absolute God must hide himself and be “veiled” in order to make creation seem real and separate from himself.  The veil is called “maya” in sanskrit and is created by each person’s “Avidya”- the ignorance of their soul nature as pure Spirit.  Saturn is responsible for each person’s ignorance and so this is how we can see his connection to creation from the perspective of having to create illusion/separation/lack from our real Self.  Ernst even goes so far as to say that Saturn rules the flow of life force into the nerves, making us sense things as cold/hot, fast/slow, dark/bright, etc. and not as God essentially.  So in this way Brahma requires and uses Saturn to create the world and the ignorance of our soul nature that so often accompanies our incarnation.

Another interesting factor is that Brahma is the most neglected of the trinity by far, as there are very few temples to Him and He is hardly mentioned compared to Vishnu and Shiva.  Saturn is similarly always the most neglected planet as well!  This is really because Saturn is misunderstood, and gets blamed for being the worst planet, but it is really because He has the most enemies from the standpoint of the lajjitaadi avasthas, and so therefore on average will be the weakest and most afflicted planet.  So then when his dasa or transits occur, we experience those weaknesses and difficulties.  But this is not because Saturn wants to wreck our life, it is because our Saturn is often not strong enough to deal with all the negative karma that we have and so during his periods there are difficulties.