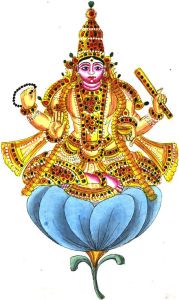 Shukra (Venus). Guru of the Asuras.

I am often asked what planets get one involved in being an Astrologer themselves.  It is an understandable question since most people studying astrology would naturally want to see if it that is indicated in their own horoscopes.  When I was reading, for the longest time there was a gap in my understanding when it came to this question.  Most of the books available state that Mercury is important for being an astrologer and that you have to have a good Mercury to do astrology and to convey what is shown in the chart to the individual.  But there must be more to it than that, since a good Mercury can also make one many other things, like a lawyer, a bookkeeper, or an artisan for example. What else is involved?

First, I want to define an Astrologer not as one who necessarily makes a living off of it, or is super amazing at it, or famous, or whatever, but as one who has devoted a great portion/majority of their life and time to the study and practice of Astrology.  A person could be a nurse by trade and in the sense of what pays the bills, but in another sense, they are an Astrologer if they are constantly contemplating astrology all day at the hospital while working, and get home and study and practice it at night.  This should be clear first.

And that is the thing with Astrology, it is a very thoughtful craft.  So while I do agree that Mercury is very helpful and important for a person to be able to convey the chart to an individual, there is more involved than that. Mercury represents skills and our aptitude overall. In this manner, a great Mercury can really make one great at most things. So naturally that can carry over to studying Jyotish, and Mercury loves to study.  But there must be some desire to study the heavens, to contemplate, to find symbolic meaning in life, to be philosophical and so forth. Mercury alone is not really the planet that is going to always do that. Mercury is a vaishya, the Merchant mentality (There are 4 castes or mentalities in human nature according to Vedic philosophy, each one offering unique skills and abilities). To really be a counselor, an advisor, a guide that has the best interest of the individual at heart, one must have other factors going on to indicate that. Mercury alone is a businessman and sometimes even a trickster, it just depends. I don’t know about you, but I don’t wanna be tricked when I go to get advice.

So the main planets you really need to see involved in a person’s makeup are the philosophical and contemplative planets, the Brahmin mentality.  Those planets are Venus and Jupiter. They are the Brahmins of the zodiac, which means most devoted to knowledge and spirituality, to learning, educating, etc.  These planets suggest a desire for refinement in life as well. Ketu is also involved in making one an Astrologer.  So when it comes down to it, having these three planets involved heavily in your chart, and connecting to the self-factors such as Atmakaraka, lagnesh, swamsha, and pada, you often find these people to be involved in Astrology at some point in their life. (Look for these planets in the svamsa or 10th from it, see my previous posts for more info on the svamsa). 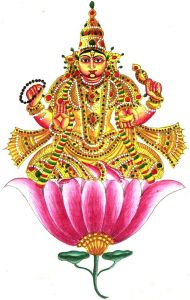 Brihaspati (Jupiter) Guru to the Devas.

Then you often find Mercury connecting to these planets in some way, via conjunction or rasi aspect, or ruling them, especially if they are going to make a business out of it. Mercury rules business as well as curiousity, so they may just talk about it a lot if the business isnt indicated by other factors in the chart.  This you will really find happening a lot! Jupiter, Venus, or Ketu in the lagna, or 10th, or with the Lagna lord is very, very common.

Now you have the ingredients as far as planets go.  But to be more precise, we need to see the 8th house connected to Ketu to make one an Astrologer, at least if they are going to spend a large portion of life involved in it.  One example I can think of is the Lord of Ketu being in the 8th, another is Ketu simply being in the 8th, another is with the 8th Lord and Ketu rasi aspecting each other, and still one more example I can think of has the 8th lord conjunct ketu.

If all these factors come together you will often see an Astrologer or someone who is involved somehow in dealing with the Soul’s journey and its many lives. There is more to determining any career than this but now you have the basic ingredients to find if one is going to be an Astrologer from the birth chart.

Oh and one more thing, a predictive Astrologer is often shown more by Venus. A psychological astrologer or more of a spiritual advisor type of astrologer can be shown by Jupiter. Venus is the Guru to the Asuras, the worldly forces of materialization and the senses. Naturally, Venusians take after this quality and tend to give great guidance to people for worldly matters.  Jupiter is the Guru to the Devas, the heavenly forces of consciousness, ideas, and inner life. Therefore, Jupiterian Astrologers will perhaps not be as inclined to predict but will give great spiritual counsel about where you are and the type of person you are, your dharma.  The best Astrologers tend to have both planets involved so they can do both of course.  But this is worth noting as there are so many types of astrologers and there are many uses for this craft.  So go to a venusian astrologer if you need help with getting a new car. Go to a jupiterian astrologer to learn a great mantra to meditate upon. Or hopefully, with the grace of God, you will find one who can do both 😉

Here are two videos that detail the environments ruled by Leo, Virgo, Libra and Scorpio.

Leo happens to rule places where kings and hunters dwell. Of course jungles and forests are under the domain of Leo as well. Virgo signifies rolling hillsides, piedmonts, and gentle mountains or hills. I give examples from my own practice in the video below.

Libra rules a lot of places: all commerce centers, roads, bridges, hotels, markets, and places of ripened grain. I elaborate with some examples below. One youtuber commented that Gas stations seem to be ruled by Libra, as they are roadside rest stops (libra) and also provide rejuvenation to vehicles, just like a hotel but for cars. I also give an example of this in my video on why scientists should study horary astrology as well.