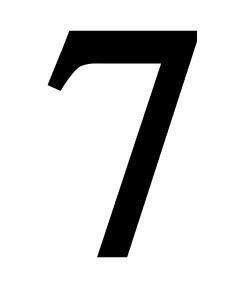 Why do things so often get grouped up into seven in this world?  Have you ever noticed that?  Not to say that the number actually occurs more than other numbers, but in the sense of the way we tend to see, group, and categorize things.  When we think about our common use and grouping of things, seven seems to have a significance, dare I say, even something sacred about it.  It happens with really big things too, like the seven continents of the world, the seven seas, seven openings or cavities in the human face, seven colors in the rainbow or visible spectrum of light that we can see, and almost all mammals have seven cervical vertebrae.  These are things we cannot seem to change very much, but what is equally interesting is that there are also many things that we as human beings have intentionally perceived or classified as being seven in type or quality, when we could probably have divided them into other numbers if we wanted to.

Let me give some examples:

There are probably many more classifications of seven in number that I am not recalling, but I feel this has made a strong enough case as these are big parts of our human life.  Also you will notice that fiction writers love to use the number seven in their fiction works, simply google the number seven and you will see one after another fantasy book that has something to do with “Seven gemstones of power” or what have you.  A modern example of this can be seen in the hugely popular Game of Thrones HBO series, which is based on fiction books.  It takes place in a medieval Europe (Kali Yuga-style) fantasy realm and their is of course an emphasis put on the “Seven Kingdoms of Westeros”, which is where the majority of the story takes place.  There are also many different faiths throughout the kingdoms but the most popular faith is the “Faith of the Seven”, interestingly enough.  Obviously this is influenced from the actual medieval European times when the seven planets were worshipped as deities.  It is also made very clear that “The Seven” is one deity, that manifests itself into seven aspects.  This is identical with European and Indian style Astrology.  { NOTE: Many people still think that Hinduism is polytheistic (believing in many Gods) but if they actually researched it they would learn quickly that it is monotheistic.  Hindus acknowledge only one God, but with many different names, aspects, and forms. This is like how there is just one Sun that lights the world, but it can be seen to appear differently depending on where one is on the world, at sunrise, sunset, or midday.  We don’t say that there is a different Sun at sunset, even though it may look different than the mid day Sun, with its bright red and orange shades.  In the same way, Brahma is the same as Vishnu, and Vishnu is the same as Shiva. }   Also even the seven different deities are pretty much the same in this fictional series as they actually are in Astrology, which may have been intentional or not on the part of the writer, but because these archetypes are so prominent in our consciousness, I would not be surprised if the Author of these stories just thought them up himself.  (Read the descriptions of “The Seven” here and see for yourself)

Why is this the case? Why does the number seven keep coming up?  Could it be that there is something within the human psychology and the way that we are designed that makes us see things in terms of seven?  Well, the reason I am bringing all this up is because it is very peculiar in the light of the Jyotish philosophy of India.  In Jyotish/Vedic Astrology philosophy, all things that exist on Earth are “produced” by the seven planets that we can see with the naked eye, and can, in a sense, see us.  And so there are seven basic states of consciousness, that when mixed, produce all the varied forms and types of consciousness on Earth.  Each of the visible planets relate to one of these states of consciousness, and each state is an aspect of the divine.  Each planet is a “karaka”, which literally means a “producer” of various things in your life.  Based on one’s past life karma, one will incarnate with these various producers in the proper harmony to produce or not produce the life that this soul needs to have for its own development and growth beyond just this one life.

So now we can see that this number seven coming up so much is really a reflection of the seven planets and how they mix and create life on Earth as it appears to be.  It validates Astrology, that we have seven of most things, either uncontrollably, or by our own arbitrary intellectual divisions.

To see how this works, let us take the human body as an example:

In this way, the seven grahas mix and produce all things for us, and in accord with our karmas that we are meant to experience in this life.  This same idea is the logic behind how we see the good or bad karmas connected to each area of life for a person, and is a fundamental concept for practicing Astrology, both western and eastern.  Now we can reflect and see, that it is no surprise that in this world of seven colors, seven seas, and seven continents, that we also have seven visible lights in the sky, guiding us along the path of our Soul in this incarnation.