“The active expression of virtue gives rise to the keenest intelligence.” – Sri Yukteswar  (1855-1936)

The above quote by the yogi Swami Sri Yukteswar is ripe with spiritual and astrological truth.  When we act virtuously, we start to see things more clearly and intelligently.  Likewise, when we really know something our actions tend to demonstrate that knowledge in a natural fashion.  This can be attractive and appealing to see someone like this.  It is possibly for this reason that saints and mystics often seem so attractive or magnetizing to spiritual seekers, because they have gone through a great range of experience and their actions naturally demonstrate such experience in a spontaneous way.  Also in the opposite sense, when we think we know something but really do not, our actions can be a clear give away of our lack of knowledge.  There is a clear relationship that can be seen here when we look at the zodiac, between our “active expression of virtue” and the development of intelligence within us.

To fully see this relationship, lets clear up a few things about intelligence in the context of an astrological chart.  When I am speaking about intelligence, I mean specifically the ability to arrive at the correct conclusion, to arrive at truth.  And in life we see that different methods can be used to arrive at the same correct conclusion.  Some people use logic to figure something out, others use feeling and emotions to figure the same thing out and get the same conclusion.  In the same way, each planet has a unique type of intelligence that it expresses.  For example, Mars would be the intelligence of logic.  Venus is the intelligence of poetry, the ability to grasp the meaning behind the words, the real heart of the message.  This post will not go into each planets intelligence, which would require an entire post in itself.

With this having been said, all the grahas give intelligence but the main one that Astrologers tend to emphasize is Mercury, as he rules the “buddhi”, the Intellect.  But when we read the Brihat Parashara Hora Shastra, the Sage Parashara gives the descriptions of the different planets.  In this, he does not describe Mercury as being intelligent necessarily.   He does start off, however, by saying that the Sun is intelligent.  This is very interesting.  He gives many complements to Mercury as well as the other grahas but does not assign intelligence to Mercury, and instead gives it to the Sun.  So the implication is that the Sun is the real planet that thinks through situations and arrives at truth.  (In case you were wondering, he describes the Moon as “All knowing”, which is similar to how many western astrologers attribute the Moon to a pyschic, right brain type of ability to arrive at truth)

I have noticed in studying charts that when Mercury is joined the Sun, which is happening 1/3 of the time anyway, then Mercury gives intelligence yes.  This is also called a Budha Aditya Yoga, which is said to give intelligence amongst other things.  When not connected to the Sun however, I do not necessarily see Mercury giving intelligence in the sense of arriving at truth.  (I can hear the astrologers gasping while reading this…bear with me)  Now if strong, this person’s Mercury will still be able to cognize quite well, and of course still be able to memorize and organize data very well.  This person may speak very fast and sharply and come off as very smart and intelligent.  They may have lots of information to articulate and be multi-talented and skillful.  But that is where we get mistaken.  Those qualities are not intelligence.  One can organize information extremely well, regardless of whether it is true or untrue information.  One can be very multi talented and know a lot of things but still miss the truth of life, and the truth of any given situation.  These days we sometimes seem to mistake having information about something with having intelligence, or knowledge of that thing.  These are different words and have different meanings.  Nowadays people consider having googled something to equate to having “knowledge” of that thing.  They are mistaken.  When you read old books the word “knowledge” did not mean “information” and was never used in that context.  It meant experience and the direct knowing of something that one gets from experiencing it for themselves.  For example, you know that you are you, and you don’t have to look that up or ask anyone else to convince you of being yourself, because you know this from experience.  This would be “knowledge”, as opposed to “information”.

So while Mercury gives the intellect, that intellect can see things a million different ways and until one is Self-Realized there is no promise that Mercury will give the intelligence to see the real truth in life.  That is the “keenest intelligence” that Sri Yukteswar is referring to, and that, as Parashara states, emanates from the Sun.

How we see this in the Zodiac

We can see how and why the Sun would give this intelligence by examining the mechanics of the zodiac itself.  Aries is the sign of virtue, action, inspiration and nobility.  Thus, Aries is the sign of the “active expression of virtue” that Sri Yukteswar mentions. The Sun gets exalted here, meaning it is the strongest it can possibly be.  So the highest or “keenest intelligence” (The strongest the Sun can be) is brought about by developing the qualities of Aries, the “active expression of virtue”.  Pretty cool huh?

Also from the sign of Aries, the Sun rules the 5th house from there, Leo.  The 5th house is said to be the house of the mind, and the intelligence we use to manage our lives.  So when we act virtuously in order to manage our lives more effectively, that is like the Aries, putting the 5th lord, the Sun, in the first house, of one’s action and expression, and in this case the sign of the same things, Aries.  And what does that do?  That makes the Sun exalted, as strong as it can be.  And when the Solar force is strongest the innate intelligence we have is strongest, and we can be “King” of our life.  This is the logic and mechanics behind this great quote from Sri Yukteswar.  He was also an advanced Jyotishi, so perhaps he was aware of this connection in the zodiac as well as in his real life experience.

This is the Astrological reason why, at least on planet Earth, we can have all kinds of ideas or information, and we may think it to be true or not true…But until we apply it in our lives and act from it, and see the result, we do not really know if that information or idea is true or not. Remember that real intelligence is brought about by virtuous actions.  The results of this truth are very evident in the spiritual growth world nowadays.  Many people  can absorb spiritual ideas quickly, and can read spiritual texts and understand them very well, but don’t apply the truths in day to day life nearly enough, and then wonder why they haven’t experienced authentic spiritual growth.  The people who shine with spiritual happiness are the people who have applied spiritual truths in their lives, and in their day to day actions, and have expressed these virtues in real time, not just on the internet or in their minds.  We have to apply what we learn or we get a sort of “mental indigestion”. This happens when we just go about reading one after another metaphysical, or spiritual self help book, but never implement it into daily life.  For this we need the strength of the Sun and Mars, the two warrior caste/fire element planets to give us the courage to act virtuously.  This is also where a jyotish reading can help someone, because if we see that they are a spiritual seeker, but the Sun and Mars are afflicted, they probably have difficulties with actively expressing virtues. In this case we can advise certain mantras, gemstones, meditations, behavior adjustments, and other remedial measures to combat this negative karma and make the best of the situation at hand.  In this way we can see why Jyotish was such a beloved tool of Yogis seeking Self-Realization, as it reveals the obstacles that are in the way of experiencing the goal of our incarnation. 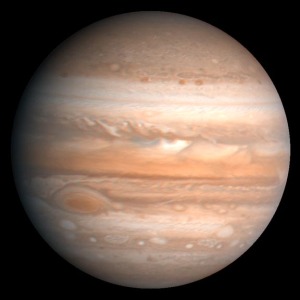 One of the names of Jupiter in the ancient Sanskrit texts is Guru.  This name is fitting for Jupiter as he is the planet that is said to be the most wise and proficient in all branches of knowledge, and that is what we think of as a Guru.  Someone who can teach us how to do what we want to do.  But what does the word Guru really mean?  It is normally defined as the person who removes the darkness from you and puts you into the light.  This is because the syllable “gu” means darkness or ignorance, and the syllable “ru” means destroyer, so the one that destroys your darkness is the common definition.  But when you look up the word Guru as a single word in the sanskrit dictionary, it comes out different.  It means “heavy“.  And of course like all Sanskrit words it has many layers of meaning.  A Guru is someone who is “heavier” in knowledge and experience of something than you are.  In this way anyone can be a guru to anyone else.  For example, I may have more experience and knowledge of Astrology than you, which would make me a guru to you for Astrology, but you may have more knowledge than me of Ayurveda, or in woodworking. This would make you a Guru to me for Ayurveda, or woodworking because you are heavier in that wisdom.  This way of understanding the word also reveals that wisdom and knowledge are the true measure of the weight and value of a person on this Earth.  In the same way Jupiter if strongly influencing the chart, makes one a valuable person to society.

It is also interesting that the ancient Seers of India gave the name of “heavy” to Jupiter, because Jupiter is the heaviest planet in the Solar System.  Jupiter is even said to slightly affect the Sun’s movement which is not at all the case for the other planets.  And of course this name is at least 2-3,000 years old if not much older, so there was no NASA information to rely upon when naming it.  It is quite an amazing thing to think about how they may have known that this particular light in the night sky had the most mass of any of the others!