The symbol for the eleventh sign of the zodiac is a man holding an empty pot of water.  Some sources say it is a man holding a pot full of water, or pouring out water from a pot, which all serve to convey most of the meaning of aquarius.  I prefer the symbolism that is given in the foundational text for most Vedic Astrologers, the Brihat Parashara Hora Shastra, by Sage Parashara.  It gives the aquarius rasi as being simply “a man holding a pot” and does not say that there is water inside the pot.  Parashara does still relate this sign to water though by saying that it “resides in deep water”.  This is an important distinction that is missed by most modern astrologers it seems, and I only came to learn about this subtlety from studying Ernst Wilhelm’s Rasi Sutras audio course, so I must give credit to him for teaching it.  This course can be purchased on his website found here, which I highly recommend for those who are practicing Jyotish professionally, as it has great insights into all the twelve Rasis.  But for now lets just look at the rasi of aquarius in the context of the twelve Rasis. 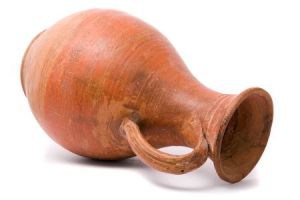 Aquarius is an air sign, not a water sign.  It is the only fixed air sign of the zodiac.  It is the eleventh sign, with only one more sign to go before the end of the cycle at Pisces.   Each of the four elements represents an aspect of ourselves.  Fire signs represent our intuition, and our connection to our soul, and the fiery activity we feel we must do in life to fulfill our soul’s purpose; our Dharma.  Earth signs represent the mixture of all elements, and our rational, practical, and even mechanical side.  Air signs represent our own unique intellectual perspective as human beings, as well as our state of desire.  This is because human desires are as impermanent and changing as the afternoon breeze.  How often do we realize a long sought after desire, only to find a new one arising only moments later?  Desires are what keep us bound to this Earth realm and are what keep us separate from realizing our true eternal nature as Infinite Consciousness, or Spirit.  Water signs represent feeling and emotional sensitivity, and inner development such as wisdom and divine love.

Aquarius is the last sign before we get to the sign of enlightenment, Pisces.  So, as Ernst Wilhelm elaborates upon more deeply in his Rasi Sutras course, Aquarius is the sign of the culmination of the pyschological battle.  Aquarius is the stage of becoming psychologically healthy, so that we can then move into the final stage of merging with God.  Paramhansa Yogananda said that what most people think of as the spiritual battle or path, is actually just the psychological battle that each person must fight between their higher and lower sense of self.  He states that once this is resolved then the spritual battle is won very quickly.  And this matches with the twelve rasis of Jyotish as after Aquarius there is only Pisces left and it represents “kaivalya”, the absolute oneness of being.

This is why I find the symbolism of the empty, or mostly empty pitcher of water to be the most appropriate symbol.  As explained previously, the air signs all represent desire, which is what ultimately keeps us bound to the cycle of death and rebirth, and which the whole purpose of Jyotish is to free us from with Self Knowledge.  Water symbolizes spirit, and the wholeness and psychological well being that comes from our innate connection to spirit. (hence why the water signs are the most spiritual signs, the Brahmin caste/mentality.)… So if the symbolic water pitcher was completely full, it would show a completely full being on the inside and out, and the zodiac should rightly end at this stage because one’s development is complete here…. But it does not end here, it ends at the next sign.  Therefore the water pot should rightly be empty.  An empty, or mostly empty water vessel symbolizes the lack of the spiritual wholeness that we all desire whether consciously or not.  So this eleventh sign of Aquarius really shows the stage of REALIZING THE EMPTINESS IN THE WATER PITCHER, AND THE DESIRE TO HAVE IT FILLED.

The only permanent way to have our symbolic water pitcher filled is to become Self Realized and then know and experience that it was never empty to begin with.  This can  be done by merging our ego with something greater than ourselves, which is the job of Venus.  And as you might expect, Venus just happens to be the most auspicious planet for Aquarius lagna, and causes “Raja Yoga” by ruling both an angle and a trine.  Venus ruling a dharma (trine house) and Karma(angle house) indicates that it is innate and natural for Aquarius to move towards merging their consciousness with something greater than itself (Venus).  This shows that a sense of love and acceptance is what is really the best way to deal with the emptiness in our lives.  Whether the Aquarius is able to use Venus in this healthy way is depending upon all the karmas shown in the astrological chart, and can be known by the skilled astrologer.

This also makes sense when we think about the ruling planet of Aquarius, Saturn.  Saturn is the planet that deals with our debts, our sense of lack, our sense of isolation, and the more depressing, empty side of life in general.  The empty water pot is more appropriate as a symbol for Saturn in this way too, as it shows that there is a lack, or an emptiness that needs to be filled.  Thats pretty much the whole purpose of the Aquarius individual, is to find a way to fill that emptiness.

How they deal with the emptiness

This knowledge should now help you understand all the qualities and characteristics of Aquarius natives.  This is why western astrology looks at them as humanitarians, and even why old vedic texts from medieval times paint them in a much more negative light.  These medieval Indian texts describe them as drunkards, or as sexual deviants.  Western Astrology is great and I do not mean to bash it by saying this, but in general it doesn’t have a lot of authoritative texts or rules compared to Vedic Astrology, which is drowning in rules and texts.  They both have their strengths and weaknesses.  The western approach typically looks at the positive spin on a sign the most and downplays the negative sides, which makes sense as this type of method is being used in a culture which doesn’t want to be told stuff that it sees as “negative” or “fatalistic”.  Western’s positive spin on Aquarius is that they are humanitarians and inventive, which is true, sometimes.  This will be the case if the auspicious planets for Aquarius are strong, and the inauspicious ones are weak.  But if it is the other way around, then the Aquarius is likely to be frustrated in feeling love or detaching from the state of emptiness and will likely engage in some type of less healthy activity to try to temporarily fill the emptiness….  This is where the medieval vedic books would happen to be more accurate.  Without a strong Venus, its more likely that alcoholism, sexual perversions, vices, or other activities that society frowns upon will come in to play for the Aquarius native in order to fill that emptiness at any cost.  To be fair to both traditions, they both acknowledge the positive side of Aquarius that can manifest as a mystic, or as a spiritual renunciate as well.  To think that this same sign can create such seemingly extreme polarities of behavior can be hard to grasp…but they are all just extreme attempts to fill the emptiness that is being felt in one’s awareness.  Knowing this we should not judge Aquarius natives for their actions but rather try to see them in the light of understanding that Jyotish provides.