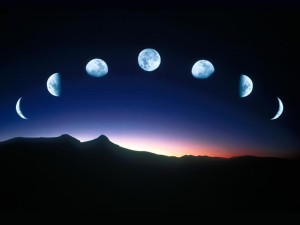 “The Sun is the upholder of all light. The Moon and all other planets do not possess light of their own. All of them shine with the light of the Sun.”  -Atharva Veda 14:1:1

The Moon is the brightest object in the night sky. With its fascinating luminescence and mysterious waxing and waning behavior, it is no surprise that it has been the subject of great interest for practically every culture on the planet.  It has probably been an object of contemplation ever since humanity expressed such an ability, and for good reason,  as there are so many interesting qualities to appreciate about this luminary body.

To fully understand the Moon, we must first look to the Sun, the other great luminary, and the source of the moons reflected light.  In Jyotish (vedic astrology), each planet represents an aspect of our own self.  The Sun is the symbol of the real Self (note the capital S, referring to our eternal Self or Soul, not the impermanent and always changing personality self).  As the body that the rest of the planets revolve around, it signifies the real and eternal “Soul of All”.  The Sanskrit word used to describe the sun in this context is “Sarva Atma”. “Sarva” means “all”, “of all”, “everything” and “all things”.  “Atma” means “soul” or “self”.  So the Sun is the life of everything.  All is one with the Sun at the deepest level of existence.  The Sun relates to that pure consciousness that manifests everything in existence.  Mathematically, the Sun is like the number 1.

The Moon is the other main source of light and luminescence in our world.  As the above quotes from the ancient Rig Veda and Atharva Veda explain, the moon has no light of its own, and is merely reflecting the Suns light.  In the Indian tradition of astrology, the moon is the planet (astronomically it is considered a satellite, but for astrological purposes it is considered a planet, as it behaves like other planets from our perspective on Earth) that represents the ego-mind and the incarnated human being.  It is the reflection of the Sun, the Supreme Self.  Human beings can certainly be reflections of the Supreme Self, but not all the time, just like the moon, who can sometimes be full and reflect the Suns light perfectly, and other times be so dark it cant even be seen.  The sanskrit word given for the Moon is “Manas”, which means “mind”, but not in the western sense of the mind as the intellectual processor, but as the thing that is experiencing life. The mind is what experiences life through the five senses.  Interestingly, because the English language has roots in the Vedic Sanskrit language, this Sanskrit word “Manas” is the root origin of all three of the English words “man”, “mind” and “moon”.

When we think about the Sun, how hot and bright it is, how intense and draining it can feel to be exposed to it for long stretches of time, it can be easy to feel overwhelmed by it.  Just as Man cannot easily perceive the Sun for more than a moment without having severe eye damage, he likewise has difficulty perceiving God in daily life. It really is logical to correlate the Sun with the Supreme Self, or God, as it is the sustaining source of all that is living in our world. Its course is so regular and unchanging, and we live our lives by it….yet we cannot understand it or even look at it normally.  Life cannot exist on Earth without the support of such a powerful solar body.

In the same way, when considering the Moon, its constant waxing and waning, changing signs, moving to and fro, and occasionally being eclipsed… It is much more symbolic of a human beings awareness. We wax and wane, have good days and bad, seem to go through cycles we have little control of and in an overall sense are very changeable by nature.  Hopefully this symbolism is making itself clear now.  Our ego-mind is just like the changeable moon.  The ego-mind can be thought of as merely a composite of personality characteristics, that we do or do not like, that are taken from a VAST amount of experiences we have had.  So it is always changing as well, as we have new experiences and out grow old experiences that we previously identified with.  For example, someone may not like spicy food, but then one day they have a delicious spicy soup in just the right quantity, and fall in love with it, and how it makes them feel. Then their ego mind will say, “Now I LIKE spicy food”.  Their ego has changed and adapted just like the ever changing moon.

And that brings us to another interesting thing about the moon, or ego-mind; its adaptability.  Each planet is said to relate to the other planets as being a friend, neutral, or enemy to them in the Vedic system of astrology.  And these relationships are based on the natural energies, or “rays” of each planet.  Like how certain colors just go well naturally, and others “clash”.  And when it comes to the moon, it is the only planet that has no enemies, only friends or neutrals.  All the other planets have at least one, two, or three enemies.  What does this tell us about the ego-mind?  Contemplating this reveals many things, but particularly significant is that the moon, or ego-mind, will latch on to and feel comfortable with anything it can in order to survive as the individual ego.  Even if that thing is not good for it and harmful.  This is why the separate egoic sense of self is such a source of pain and suffering.  It will not refuse identifying with even the worst elements of life in order to keep growing and experiencing.  The Moon with Jupiter for example, is showing that a persons mind is comfortable identifying with Jupiterian things such as knowledge, wisdom, a sense of purpose in life, and optimism.  The Moon with Saturn, on the other hand, shows a person identified with suffering, pain, lack, hard work, and the difficult sides of life.  Oftentimes they will actually be somewhat comfortable with the painful sides of life. They will be used to struggling, and enduring. When things are going great in life, they may actually think, “something isnt right”, but it is because they just are not as used to life going so easily.  The Jupiterian-moon person may be the opposite, and when life is going right, they will stop and think “life IS going right”.  This shows us that some things are naturally more beneficial for us to identify with than others, but if we decide to, we can latch on to even the harshest aspects of life, in order to keep growing and experiencing life as it is happening…

The moon, or mind, can therefore work out well for a person, or not so well for a person, depending on what they are identifying with, as revealed by asessing the moon in a horoscope.  But either way, whether ones mind is more comfortable with wealth or poverty does not change the fact that they are identifying with a temporary and changeable sense of themselves, which waxes and wanes.  It is still not the real Self.  So from the Yogic viewpoint,  identifying with this passing sense of self that one is comfortable with can bring happiness or sadness, but will still invite suffering to the “moon-identified”, or ego-minded person, until they are able to become “Sun-identified”, or “Soul-minded”.  We know already that the Sun is the “Self of all”, hence the emphasis on “Self-realization” from the yogis and enlightened ones.